Do You Know Your Figures? Top Tip!

Do You Know Your Figures? Top Tip!

How many times do you see it on TV programmes such as “The Apprentice” – the idea is great, the location is right, the sales are flowing…but the figures are wrong. That team invariably finds itself in the boardroom for making a lesser profit than the other team, despite having by far the best project of the two, pending the wrath of Lord Sugar. How else can I put this – knowing your figures is VITAL because if you don’t, you could find yourself on the receiving end of a very harsh lesson.

During a recent post-programme channel flicking session, I stumbled across a programme I’d not seen before “Chefs on Trial”. Alex Polizzi, AKA The Hotel Inspector, alongside the landlords of the gastropub “The Miners Arms”, we’re putting three wannabe Head Chefs through their paces. The overall winner will take the prize of becoming the new Head Chef at the pub in question. I can’t say I’ve seen the whole programme, but I saw enough to get the gist – basically, it’s “Masterchef” meets “The Apprentice”, with the chefs having to cook good food at a price that’s befitting of the establishment and in turn, profit-making.

If You Can’t Stand the Heat…Get Outta the Kitchen

Now don’t get me wrong, the food looked almost good enough to eat…ahem…but all three of them got their prices completely wrong. One cost and priced the dish correctly as far as margins were concerned, though it was so lavish it was far too high end for the pub in question (the dish would have looked more appropriate in a Michelin star restaurant!) Another costed the dish correctly but got his margins completely wrong, charging far too low a price for the menu. The third…well, the third didn’t even do any costings at all! Astonishingly, he won his heat (although it has to be said, the dish looked so good I could almost taste it through the telly!)

Turnover is Vanity…Profit is Sanity 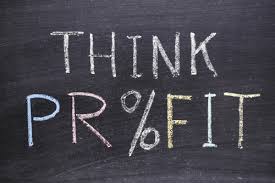 I once heard a salesperson say “All sales are good sales”, but when I asked what margins he was working to, he didn’t know. His boss had given him carte blanche to simply get sales through the door, so he did what was asked of him. Now, fair play to the lad – he was hitting his targets every month – but if I told you that company was no longer trading, would you be surprised?

It is imperative, in any industry, that you know your fixed and variable costs. These must include everything from salaries to stationery. Only when all expenses can be accurately ascertained can you determine whether or not your margins are appropriate. This can be the single hardest thing for a company to do accurately because the other consideration is the competition – what are they charging? How do you ensure you don’t price yourself out of the market?

I don’t profess to be anything of an expert on the subject, but as an established business owner, I do understand the importance of ensuring your margins are correct. I have worked at places where there is a set price mark-up, where there is a set percentage mark-up and where a figure is plucked out of thin air. All have their merits, though not all will work for all. Find what works best for your business and implement it!

Now, all this talk about food has made me salivate. I hope Steve’s taking me somewhere nice for dinner tonight!!!